Rocky Brook Trail is located on Rt. 518 in East Amwell. 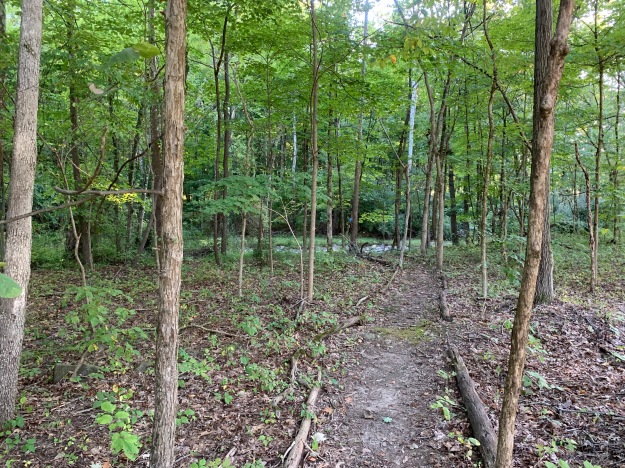 Sometimes, it just gets away from me. On one of the first days of September, I hiked the Rocky Brook Trail. So many responsibilities and events came up and time flew by. With the busyness of life, I just did not have a chance to sit down and write.

Unlike some of my other more tedious tasks that can be easily forgotten, writing about my hikes is a calming and reflective time for me. When I think about Rocky Brook Trail and as I look at my pictures, I am transported back to that chilly and quiet morning.

My morning hikes in Spring and Summer were loud and boisterous, filled with the sounds of millions of organisms attending to their daily business. But in this chilly morning air, all is quiet. Many of the insects have mated, laid eggs and perished. Some of the birds have begun their migration to their winter homes, while others remain under a metaphorical blanket this morning until the temperature rises a bit more. Then they will emerge from their night’s lodging place and commence their day.

I have been asked a few times recently if I take notes when I hike. The answer is “sort of”. I don’t write anything down, but I use my pictures to bring me back to the sights and sensations of the particular location.

As I walk through a preserve, I try to be mindful. I focus on what I am experiencing…what the air smells like, what I hear, what the ground looks like and feels like under my boots, what I see in front of me, below, above and on my periphery.

My intention is to be fully present. There are times that I forget to take pictures, especially when I become entranced by a beautiful animal or when I am lost in a meditation while gazing at the water as it meanders around rocks and tree roots. There is so much beauty. I often lose track of time as I watch the leaves fall slowly and gracefully from the tree canopy.

A Spined Micrathena, Micrathena gracilis. The Punk Rock spider of the Sourlands 😉

I have never seen the Stony Brook this shallow! I have been to this trail a few times since May and was not able to cross the stream because the water was very high.

Desiccated lithophytes. A lithophyte is a plant that grows on bare rocks. These plants were once under the water.  But with the lack of rain, they were exposed and subsequently, dried up.

Death in the Sourlands. This is a decaying body of some sort of moth or butterfly. I attempted to identify it but soon gave up. There are so many amazing butterflies and moths in New Jersey but I don’t know enough about them to tell the difference without their wing markings.

Check out this link to see the moths and butterflies of New Jersey. I think I would faint if I saw a Scarlet Winged Lichen moth!

Water striders breaking the surface tension of the water. 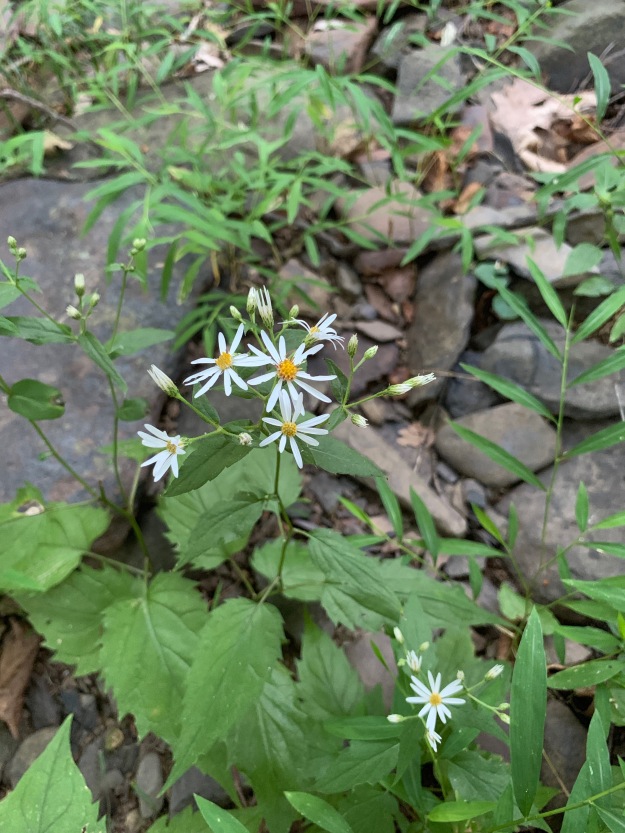 The contrast between the rocks and the forest canopy was mesmerizing. 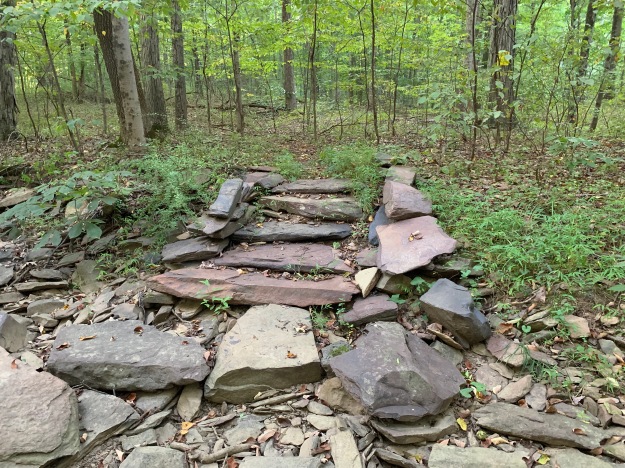 What gorgeous and welcoming steps into the forest!

Bottle brush grass, Elymus hystrix. This grass is just about the only grass that I can identify with confidence! 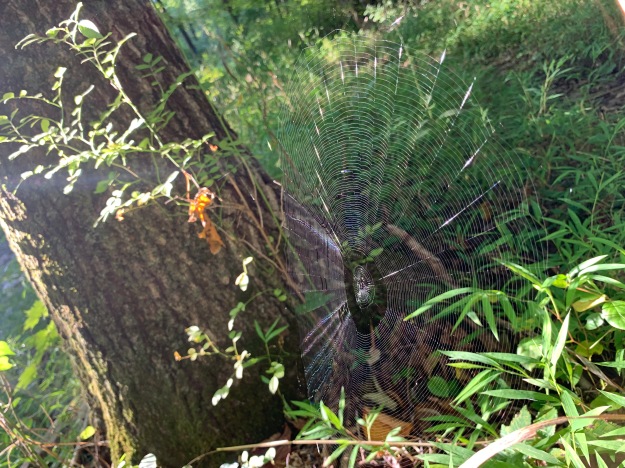 I cannot get enough of these beautiful spider webs in the morning sunshine!

American Hogpeanut, Amphicarpaea bracteata. I am getting more and more curious about what these Hogpeanuts taste like! 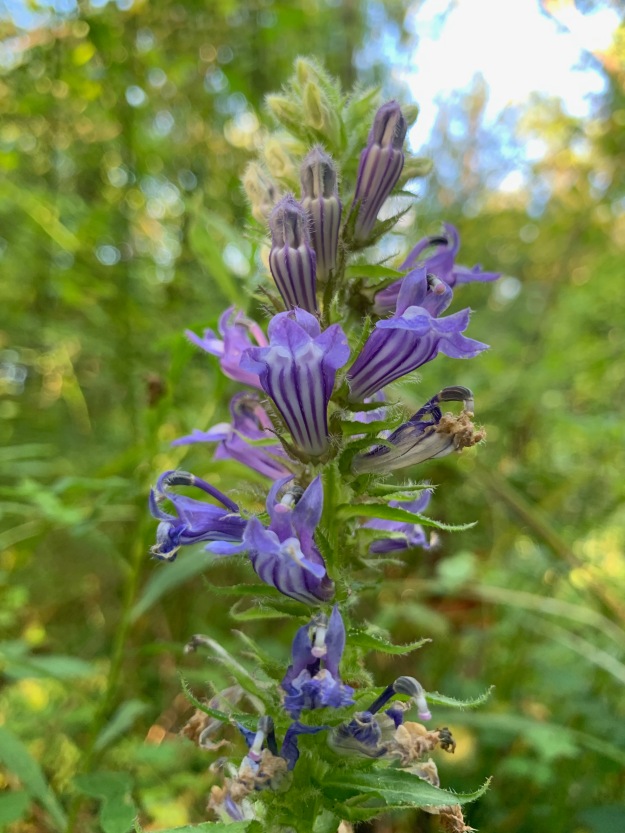 Chicory, Cichorium intybus, is an invasive. But I am not going to lie. I love these gorgeous flowers.

When the Red Maple (Acer rubrum) buds start to swell, the trees glow with a red aura throughout the canopy.  What I love about the Red Maple, is how discreet this first glimpse of spring is.  It is so easily missed, but once you become aware of it, you will start to look for it at the end of every winter.

There are many reasons Red Maples are special to me.  I love the subtleness of their buds turning red, it feels like a secret whisper to only the acutely aware that spring is here.  The flowers are not as obvious as Dogwoods and Magnolias, but they are equally as showy and beautiful when you get close.  They are able to survive in water logged soils and rocky uplands alike and provide habitat and food for a variety of mammals and birds.  All of these things are nice, however the reason that every time I see Red Maples in bud is because it reminds me of when I found out I was pregnant with my first child.

It was March 2014 and spring break from graduate school.  My husband and I planned to take a road trip down to Savannah, Georgia and then make our way out to Cumberland Island.   As we drove from New Jersey to Georgia, I spent hours staring out of the car window.  My laboratory at school had no windows, so I spent the majority of my time in a closet piping microliters of bacterial and fungal DNA into tubes.  While in New Jersey there were no signs of spring, as the hours ticked by as we drove south, I started to see hints of spring along the highway.  The first were the red maples, their branches glowing with their deep vibrant red when we hit the border of  Virginia and North Carolina.  Then came the vines; multiflora rose, catbrier, and raspberries, their stems turning green before they leaf out in South Carolina.  Then grasses and soon oak flowers in Georgia.  I’ve seen this transition so many times at home, but it was so fun to watch it happen as we drove.  It was like watching spring on fast forward.  We spent a few days wondering around Savannah and I was in awe of the Live Oaks and Spanish moss.  We then drove south to St. Mary, Florida and took a ferry to Cumberland Island.  If you have not yet been to Cumberland Island, I suggest you stop doing whatever it is that you are doing, and go.  The Live oaks of Savannah were gorgeous, but to see them on Cumberland Island with those big beautiful ferns and the Spanish Moss… it is a place of magic and fairytales!

When we started our drive back to New Jersey, the green colors along the highway faded, but when we arrived back home, the Maples with their expectant red buds were swollen and about to burst open to reveal their hanging flowers.  The next morning, I found out that I too, was expecting.

Red Maple is in the Aceraceae family, which is characterized by deciduous leaves that come off the branch opposite of each other.  While it may seem insignificant to note opposite leaves, it is an important identification characteristic because there are only a handful of tree species in this region that have leaves that are opposite one another on a branch, the majority of species have leaves that are alternate (and a few that are whorled).  Another familiar characteristic of trees in the Aceraceae family is that their fruit are samaras.  A samara is a indehiscent (does not split open when dried to reveal seeds) fruit that has wings.  You may have called them “whirly-gigs” or “helicopters”, or split the fruit end and stuck it on the bridge of your nose and pretended to be a rhinoceros.  The leaves of red Maple usually have 3 lobes, but occasionally can have 5.  The leaf margins are serrate (sharply toothed) and the underside of the leaf is glaucous (covered in white, waxy substance).  The flowers are pink to red drooping racemes.  Racemes are a flower cluster, where each flower has a long stem and they all attach at a single axis point.  Red Maples are also unique because they are considered polygamo-dioecious.  A dioecious plant is when there are separate male and female plants, however, a polygamo-dioecious plant can have both male and female flowers on the same individual, or one tree entirely female flowers or entirely male flowers.  The root system of Red Maple is shallow, which is typical for species that live in water logged soils.

Red Maples are medium sized trees that grow quickly, reaching a height of 50-70ft.  They are a cosmopolitan species, enjoying a vast range across almost half of the United States and living in both swampy, water logged sites and rocky upland habitats.  This species can be an effective pioneer species and become established on disturbed sites.  Red Maple can also grow in many different forest cover types and is utilized as a street and shade tree.  While once a minority in our forests, Red Maple has become a dominant species due to its ability to thrive in multiple habitats and has become a major component of Eastern forest cover.  They can live as far north as Nova Scotia, West to Wisconsin, South to Texas and are found across the entire East Coast of the United States.

The Red Maple also provide habitat for common flickers, screech owls and pileated woodpeckers.  When growing in floodplains and riparian zones, wood ducks will nest  in their cavities.  It is important to note that Red Maple is toxic to cattle and horses and this needs to be kept in consideration for those keeping livestock.   Red Maple is an important source of timber and is often used in furniture, flooring, instruments, veneer, pallets, cabinetry and more.  The sap of Red Maple can also be reduced to make maple syrup.  While the sugar content in Sugar Maple (Acer saccharum) is greater than Red Maple, you can still use its sap to create maple syrup but the ratio of sap:syrup is greater.