The Watershed Institute is located on Titus Mill Rd in Pennington. 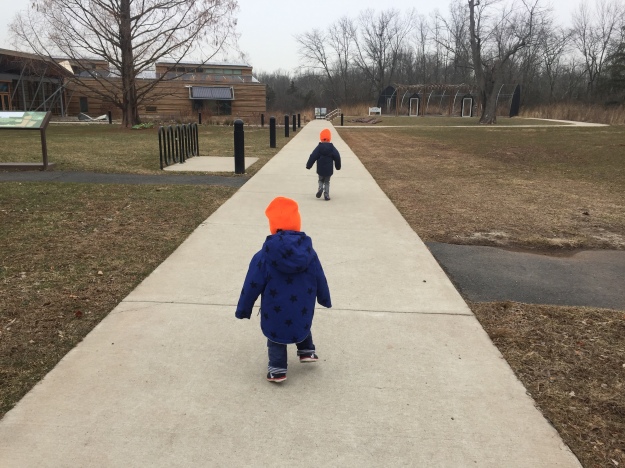 It had been too long since the Wild Boys had gone on a hike with me, so when the temperature warmed up to a balmy 26 degrees F, I decided today was the day! The weather forecast had predicted rain, but since the skies were blue, I thought that the Watershed Institute would be a great choice. If the rain held off, we would be able to hike and if the skies opened up, we could play inside! Luckily for us, the onset of the rain was delayed long enough for us to accomplish both!

I really love taking the Wild Boys for hikes at The Watershed.  The newly constructed elevated path offers a unique view of the meadow. During the summer, there are many insects and I can get a good view to see “Who” is pollinating “What”. Today, my boys were so bundled up in layers that they didn’t complain about the below freezing temperatures. I only wished they would have kept their gloves on! 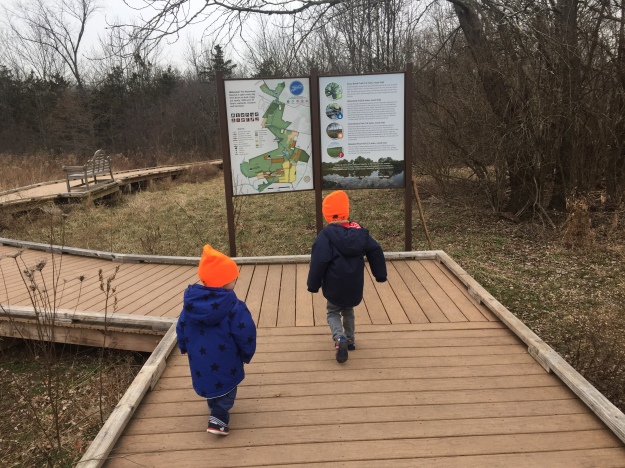 A quick stop at the map in order to help us decide which trail to take!

Both boys usually have an aversion to headgear, but they were more than happy to sport their Sourland Conservancy hats. I love these orange hats. When my big dude takes off running, I can spot his hat even when he is pretty far ahead of me. 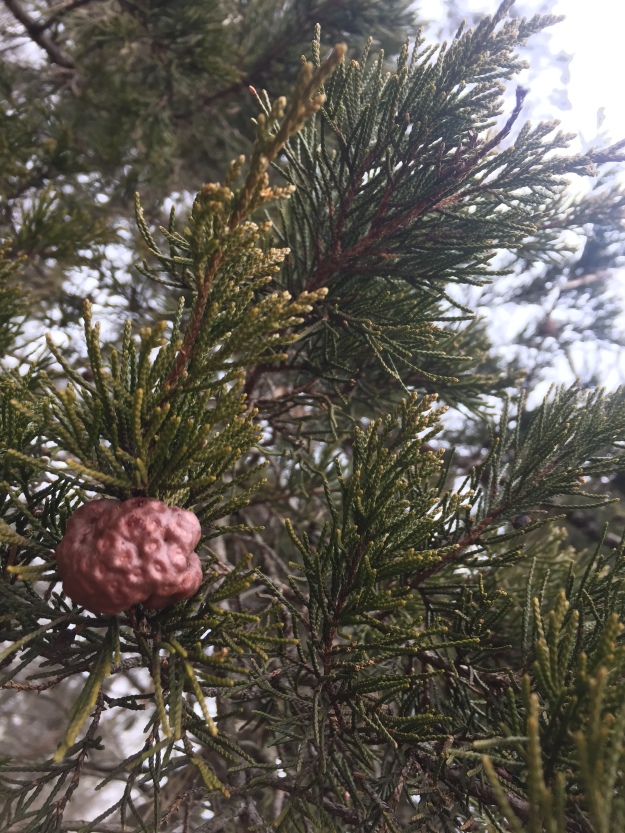 In the first stage, the fungus forms large, brown galls on Eastern red cedars. The gall will stay on the tree for 1.5 to 2 years. In the spring rains, the gall will erupt with gnarly orange gelatinous telial horns which contain spores. The telial spores germinate and form a basidiospore which infects the second host, the Apple Tree.

The amount of rain in the spring determines the extent of infection on the Apple tree. When an apple tree is infected he upper side of the Apple leaves will develop yellow spots and as the infection progresses, an orange jelly-like substance will begin to ooze from the yellow spots on the underside of the leaf. A severe infection will cause the apple leaves to die and shed prematurely, impacting the photosynthetic capability of the tree. I love this video from Purdue University describing the life cycle of Cedar-apple rust and I especially love the dramatic music! 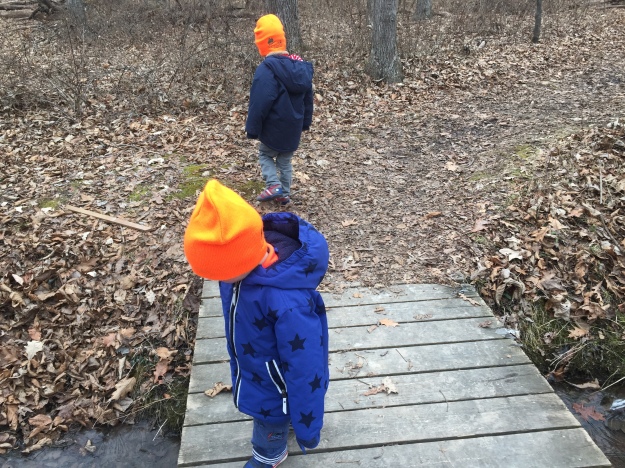 I am not going to lie… I was a little nervous when I let my Littlest wander over this bridge without holding my hand. Toddlers are often top heavy (those big beautiful noggins are so cute!) and he sometimes tumbles when he leans forward to investigate. I decided to have faith in him and let him explore like the “big boy” he is trying to be. He did great!

As a parent, I sometimes underestimate my children’s abilities because I am so concerned that they might get hurt or cold or wet!  My Littlest was born prematurely, spent some time in the NICU and has been receiving physical therapy since he was 4 months old. He is now almost two years old and has made amazing progress.

Children need structure but they also need free play, to explore, grow and develop confidence in their own abilities. Many of my child’s biggest developmental leaps have not happened during therapy sessions but when I wasn’t instructing him. He recently pushed his boundaries by climbing from the couch to the window sill and shimmed across it in order to get a better view of the bird feeder, much to my chagrin. He was very proud of himself.

The forest provides my Littlest with the opportunity to work on his balance on un-even ground; gross motor development by climbing, jumping, running; fine motor skills through gathering and moving stones, sticks and grouping them into piles; and communication skills when we talk about the different things we see. It is a wonderful environment for children with “typical” development as well as those that are on a different developmental path.

My big dude testing his balance skills on every downed log that he could find!

Mycelium: the mass of branching, thread-like, white “strings” called hyphae. The hyphae are the vegetative growth of fungus while a mushroom is the fruiting body.

This large grub was almost the length of my thumb!  I am not sure what species it is, but it may be a beetle in its larval stage. 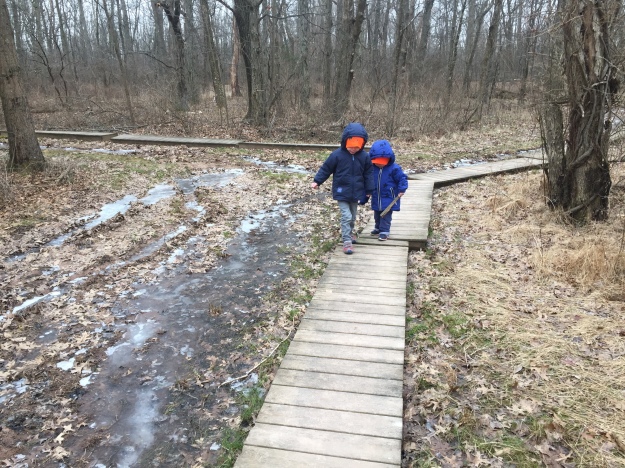 There is a proverb, “Speak softly but carry a big stick”. My Wild Boys adhere to the adage that children should “Shout loudly and carry big sticks to bang against everything”.

They both loved stomping and cracking the ice.

I am not sure how this Red Maple leaf, Acer rubrum, melted into the ice. Perhaps the leaf fell from the tree and slowly sank into the freezing water?  The depression that the maple leaf created in the ice is almost half an inch deep! 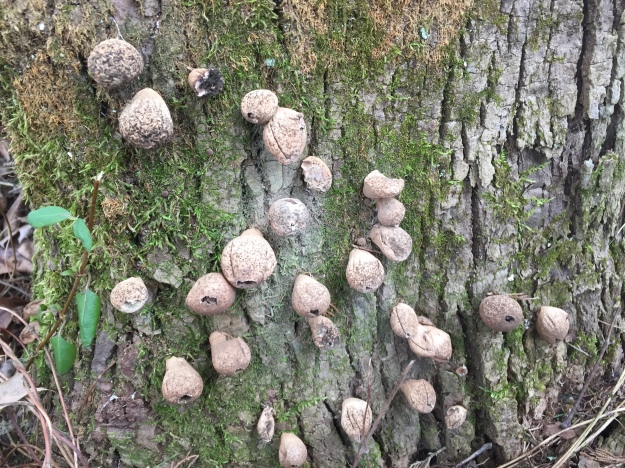 I believe that these are a type of Puffball, Lycoperdon spp.. This is the first time that I have seen so many clustered together. I enjoyed this video about puffing puffballs and I wish that I had carried a paintbrush in my pocket so that I could puff the puffballs, too! 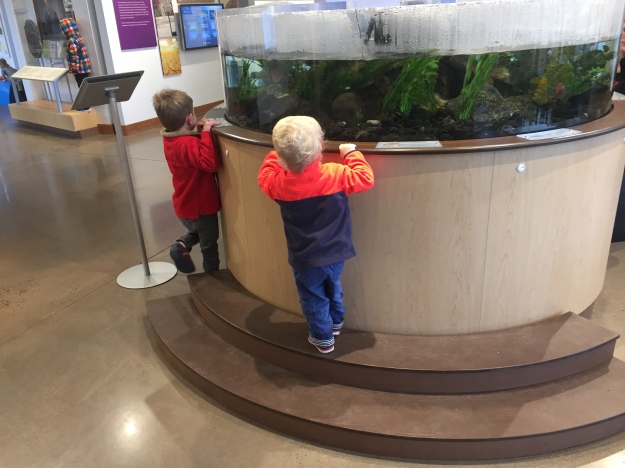 After our winter hike adventure, we visited the Watershed Institute Center to see the fish, snakes, turtles and insects. 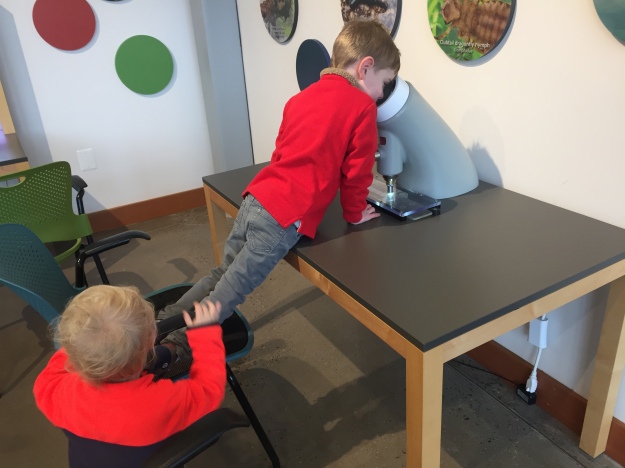 We practiced our identification skills of macro invertebrates! If you are interested in macro invertebrates and stream water quality, make sure to be on the look-out for the Sourland Conservancy’s stream monitoring training program coming up this spring!

A Dawn Redwood cone, Metasequoia glyptostroboides. This is one of my favorite latin names. I don’t know why I enjoy saying it so much, but I really do. 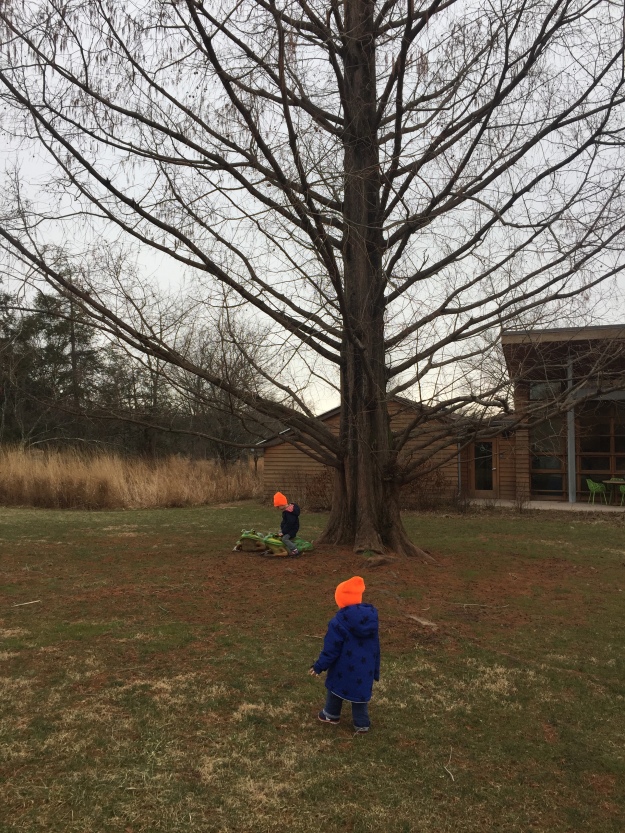 Just a fun short video of the Wild Boys playing on the ice. Watch it until the end for a good giggle.

Spoiler Alert: He was fine!