I have been thinking about the poem “Stone Circles” a lot lately.  Perhaps it is because the forest is sleeping and the boulders are standing out in all their glory, or maybe it is the warmth that they hold in the sunshine when everything else is cold.  When I first came to the Sourlands I had thought that the boulders were here due to glaciation, but in fact I was mistaken.  The terminal moraine (a moraine is a collection of rock debris [boulders] that were pushed along by a glacier) does not cross the Sourland region (read more about where it did cross New Jersey here!).  Instead these diabase boulders were part of the bedrock (formed by slowly cooling magma beneath the Earth’s surface) on the ridge of Sourland Mountain.   Over millions of years as the tectonic plates continued to slide east and west the ground, no longer flat, was forced to fold up into what is now our Sourland Ridge. All of this pressure caused large cracks, called faults, and smaller cracks, called fractures, which to this day form the primary source of groundwater storage for our wells in the Sourlands.  Erosion of the softer layers of sedimentary rock covering the diabase, plus the melting of the the permafrost covering the earth’s surface during the ice age exposed the diabase bedrock. During this thawing some of the bedrock broke and slid down the side of the mountain in large pieces and experience spheroidal weathering, which gave these boulders their rounded appearance. David Harper, a local geologist, leads hikes for the Sourland Conservancy through the Somerset Sourland Mountain Preserve and discusses in great detail the rich geology of this region (buy his book here!).  Keep an eye out on our events page for our 2019 Hike flyer to find out when he will be leading his next hike!

it’s about the rocks

of this Sourland Mountain trail

turning in at the blue blaze

in the air itself

those who purloined these sentinels

seem not to have reached

this deeply into sanctuary

I step into sacred sites

focused on the keystone

where the chief presided

from hunting to gathering

then back once again to the hunt

I bow to these predecessors

apologizing for all our

Carolyn Foote Edelmann is the Co-founder of Princeton’s Cool Women Poets and was the first member of the Princeton community accepted into Princeton University’s Creative Writing Program. She studied with Ted Weiss, Galway Kinnel and Stanley Plumly.  Carolyn has photographed and written on nature/travel/history for The Times of Trenton, U.S. 1 Newspaper, The Packet Publications, and Jersey Sierran and New Jersey Countryside magazines.  Her blog, NJWILDBEAUTY, was requested by the Packet Publications, and continues independently. Her chapbook, Gatherings, was launched in 1987, aboard the QEII. Between the Dark and the Daylight. . . won the 1996 i.e. press Prize.  Carolyn’s roles at D&R Greenway Land Trust include publicity, Community Relations, managing Willing Hands; as well as serving as Curator of the Olivia Rainbow Children’s Art Gallery. If she were to have an epitaph, it would read, “I’D RATHER BE BIRDING!”

Link to trail map and description.

This was the coldest hike I had ever been on. The air temperature was a whopping 8 degrees above zero, but with windchill, the temperature felt like negative 10 degrees fahrenheit!!! I usually enjoy hiking with friends, but I particularly love company on a day like this when I would have only had myself to complain to about how frigid it was.

When you have companionship in such challenging circumstances, the comrade in your adventure helps you to ignore your cold woes and fully immerse yourself in the adventure at hand. One of the reasons that I enjoy going on hikes with others (beyond just hanging out with favorite friends), is that each person sees the world from their own unique perspective and contributes different expertise and interests. I am the one who always wanders around searching for plants, while others may be interested in identifying insects, birds, reptiles and geology.

My former roommate is a veterinarian and without fail, each time we are out, she spots the animals that I have overlooked. She is very in tune with the animal kingdom and I always learn from her. Today, she provided me with an anatomy lesson on the white-tailed deer, Odocoeilus virginianus.

My friend and I bundled up really well and waddled on down the trail. 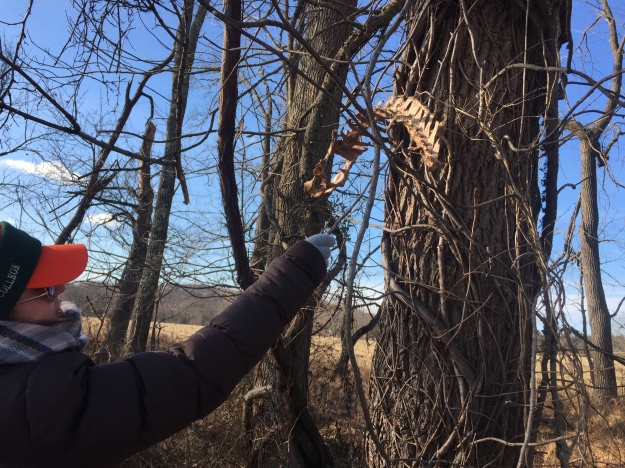 The last time I was at this preserve, I saw a deer carcass in a tree. The carcass we found today in a tree was much smaller than the one I had seen back in September. I don’t really know why the deer remains were up in the tree, but perhaps someone placed them there so that people walking their dogs wouldn’t have to wrestle yummy deer bones from their dog’s clenched teeth. Actually, later on we did notice a dog trotting along triumphantly with a deer elbow in his mouth.

My friend points to the costo-vertebral junction, which is the place where the ribs meet the spinal cord. 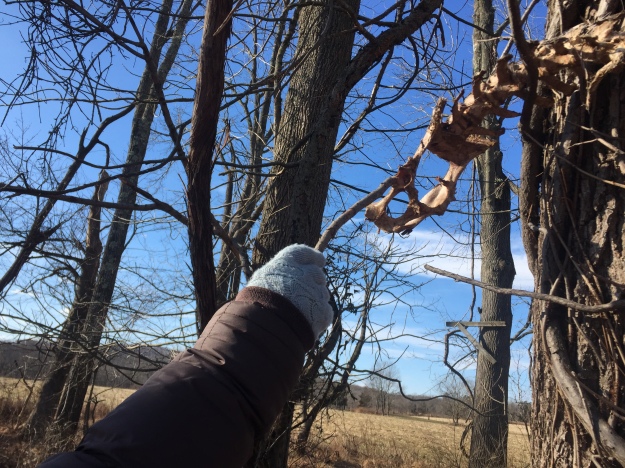 This pocket is called the acetabulum, where the head of the femur meets with the pelvis forming the hip joint. 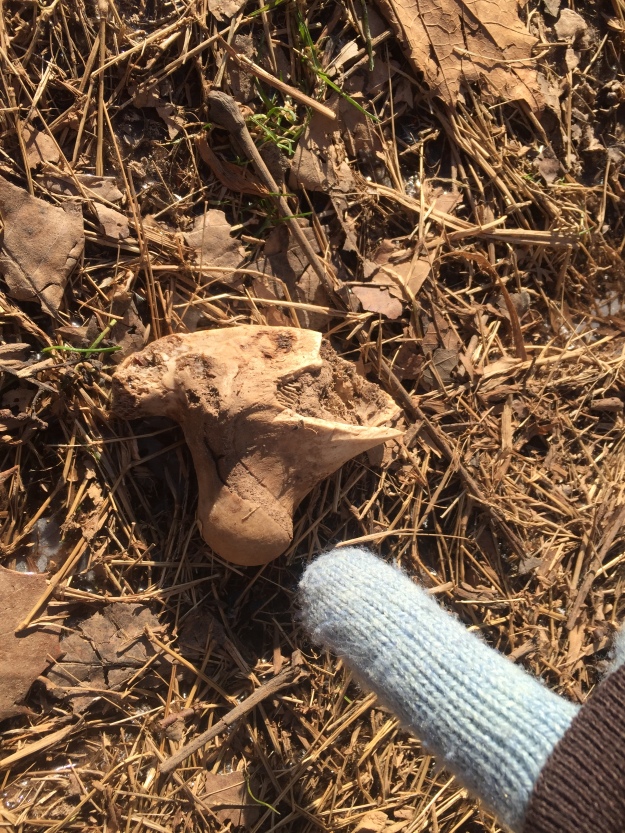 We found the head of femur about 200 yards away. It appears that the rest of the femur has been chewed up.

Even though the Thompson Preserve is now just a sea of browns and grays, I can see the colors of summer in my mind’s eye.

Frozen jelly fungus, Exidia recisa. I love how the frozen water mimics veins and arteries inside this mushroom!

American sycamore, Platanus occidentalis, fruit. This type of fruit is called a “Plumed Achene”. A plumed fruit is one that has tufts of hair attached to the achene. An achene is the dry outer casing that holds the actual plant seed and is indehiscent (does not open to reveal the seed when it is mature). 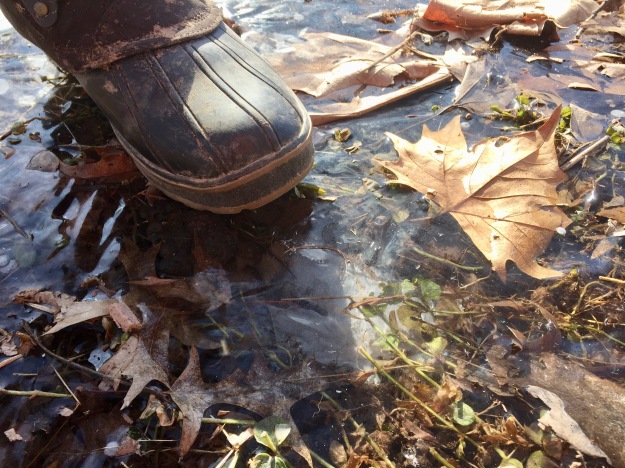 Right before the cold snap, there was a large rainstorm which flooded portions of this preserve. This ice is so clear that it seemed as if we were walking on glass! 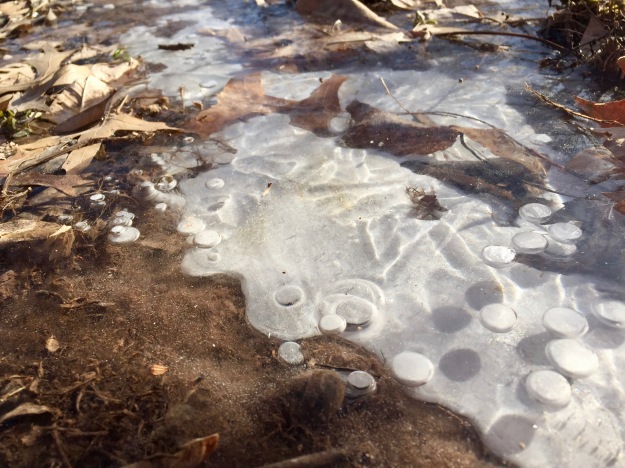 Air bubbles trapped in clear ice! At first, I thought that these may have been sulfur gas bubbles because the soil nearby had a classic rotten egg smell. But it’s more likely that air bubbles were traveling under the surface of the puddle and then as the water froze, so did the oxygen bubbles.

My friend snapped a photo of me trying to capture a picture of the frozen air bubbles! 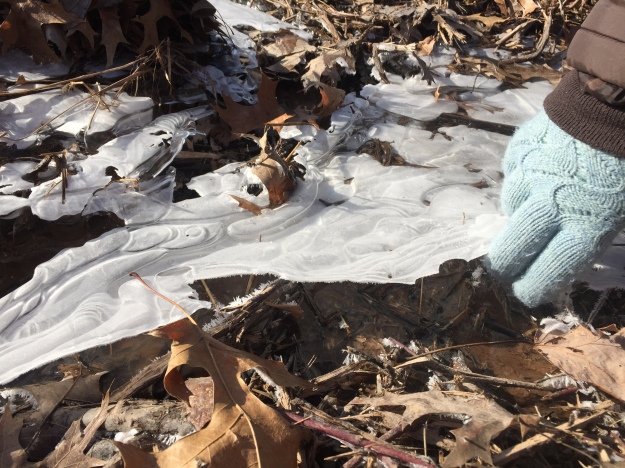 I know I keep saying this, but this truly was one of the most amazing natural phenomenon that I have ever witnessed!

My friend’s finger is underneath this frozen ice shelf/cloud. First there was a frozen puddle with an air pocket, and above it, a floating sheet of ice. I have no theory as to how this formed but would absolutely love to know from you if have any ideas! 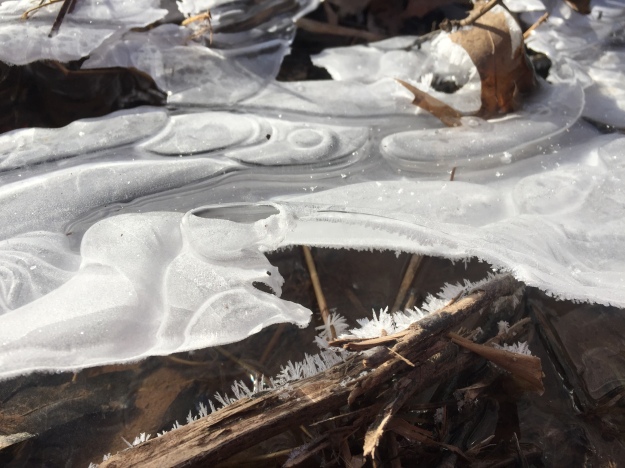 Whenever I see frozen streams in the winter, I always wonder where the fish are living. As we walked along this stream, I noticed that it was mostly frozen except for one area where the water was deeper and moved quickly. Suddenly, out of the corner of my eye, I saw a flicker of a fin… a fish! Although the surface of the stream was frozen, underneath a couple of fish were swimming around!

Here is my very unglamorous and shaky video of the fish swimming under the ice!

Eames preserve is located on Harbourton Woodsville Rd in Pennington.

The weather has been quite chilly. But after weeks of confinement inside the house with sick kids and obligations, I began to feel claustrophobic. I rarely poke around my home or office in an attempt to find something new.  Usually, I am just trying to “unsee” the mess. But even when it is 20 degrees Fahrenheit outside, I am happy to spend time in the woods peering around rocks and turning over logs. There are always some fun new things to discover just beyond the bend of a trail.

It has been six months since I last visited the Sourland’s Eames Preserve.  I used to work on a research project at Eames and I have been there more times than I care to remember, yet I had not explored my way through the entire preserve. When I was working, I would hike to the designated research area and then hike directly out again. Today, the woods at Eames were calling for a deeper exploration. 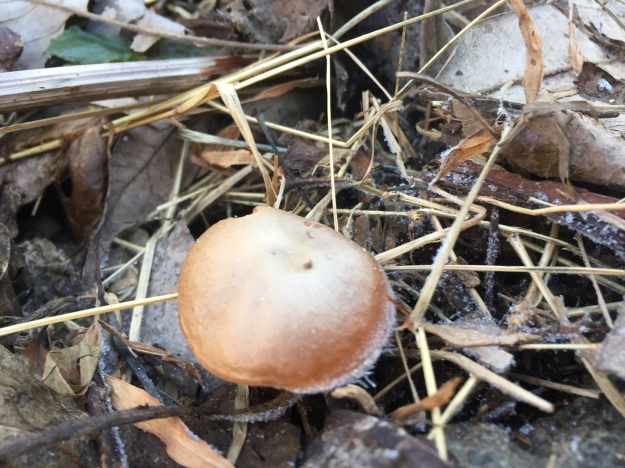 A small mushroom with frost emerging from both sides.

This may be the hoof print of a deer superimposed upon the paw print of a dog. It seems to be the most logical explanation.

It appears that this coyote devoured another furry creature.

Although I am really not a fan of the cold weather, I must admit that these frozen puddles are beautiful! 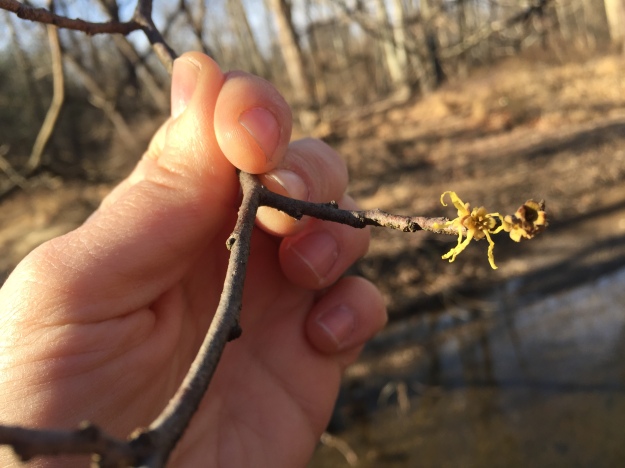 Witch Hazel, Hamamelis virginiana, is still holding onto its final blooms from 2018. It reminds me of how we like to believe that we start the New Year fresh with a clean slate, but in reality, we all still carry remnants of the past. 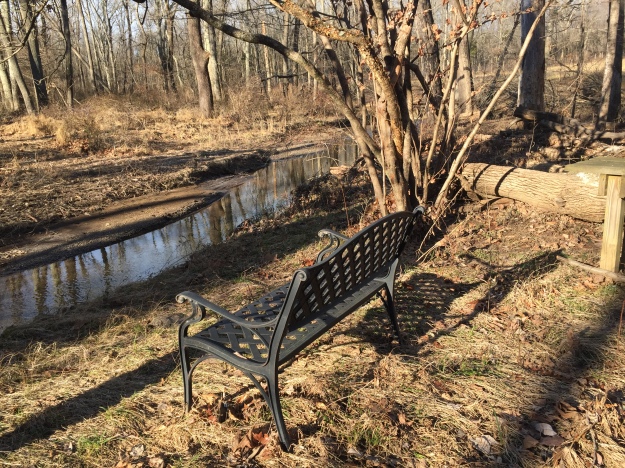 This bench is situated at the halfway point of the loop. I can imagine hiking here with my family in the summer time and having a picnic. The boys will love to play in the stream! 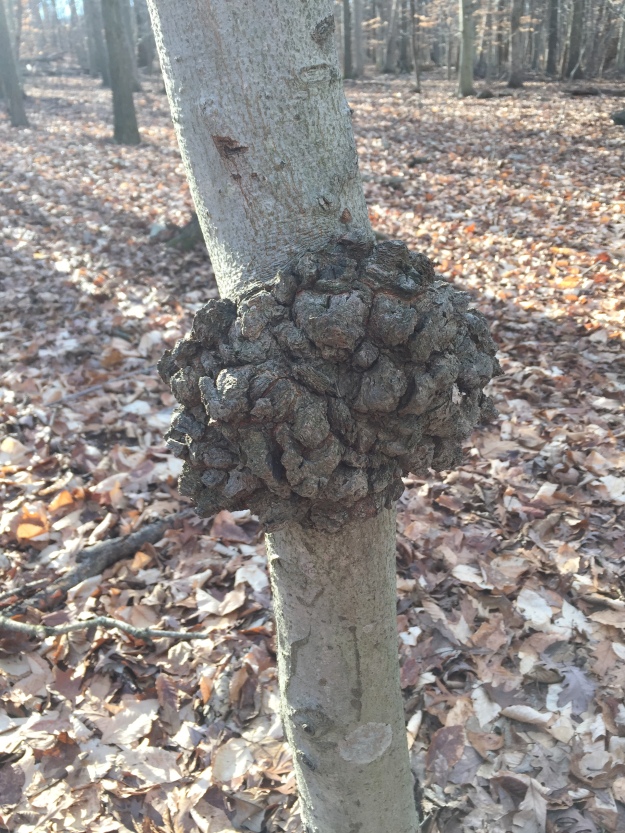 A burl! These abnormal growths on trees can be caused by many different things such as an injury or a disease. As the tree grows, generally so does the burl. The burls are not detrimental to the trees, but since burls are prized by woodworkers, they sometimes poach the burls from live trees. Depending upon the size and location, removal of the burl can be catastrophic to the living tree.

These leaves were frozen in a little vernal pool.

Spring Beauty, Claytonia virginica, leaves peeking out through the leaf litter. These little ones most likely sprouted during the warm spell we had two weeks ago but unfortunately with this really cold weather, they will not make it to bloom. 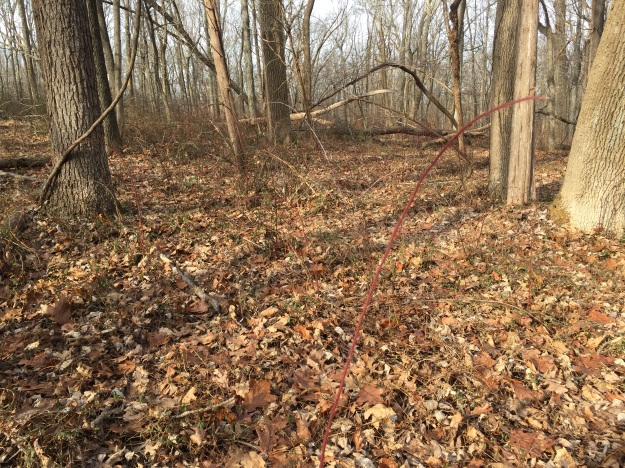 I wasn’t able to take a picture that truly captured what I was seeing here. These Wineberry canes, Rubus phoenicolasius, were glowing in the understory. I am looking forward to all their berries this spring!

A bleeding canker.  There are a couple of things that can cause bleeding cankers, but usually it is either a species of Phytophthora (root rot fungus) or bacterial wet wood.