Walking in the woods is a wonderful way to relax, exercise, think and catch up with friends!  Recently, two of my friends were off from work on a Monday so they each drove 45 minutes to come join me on one of my blog hikes!  I was so delighted to have their company and to share Baldpate Mountain with them.  Baldpate is one of my favorite places to hike in this area.  I have spent so much time in these woods that it almost feels like my own backyard.  Even though I am very familiar with the preserve, I still discover new and fun things.

I warned my friends that I got lost here once when I was hiking around with another friend.  I thought that I knew where I was going, but I clearly had no idea.  My friends said they trusted me and so we took off.  Well… needless to say, I went down a trail I thought I was familiar with, but apparently I was not.  I led them 1.5 miles down a trail that I had never been on before.  I then realized that we were headed in exactly the opposite direction than I had planned to traverse.   While this new area was really cool and I discovered a lot of new geology and ruins, it was way past lunch time and we were famished! Our hungry bellies propelled us at amazing speeds and we hiked out of the preserve much faster than when we hiked in!

This post is possible because of a community of naturalists! I reached out to quite a few people to help me because I encountered so many “New-To-Me” organisms and I had no clue where to begin.  I asked Pat Coleman for help when I couldn’t identify a plant down to species.  I reached out to my favorite Lichenologist, Dr. Natalie Howe for help with identifying the lichens we found.  The ever generous Nina Berghardt identified our mushrooms and gave us some super cool information.  I also asked Paul Kurtz of the NJ Department Of Agriculture for help with identifying an insect and egg mass that we found and he provided some really interesting information. Thank you Natalie, Nina and Paul for your help and Knowledge!

All of these wonderful people have given talks or have lead hikes for the Sourland Conservancy.  They have volunteered their time and their expertise and I am very grateful to them for helping me learn more about the amazing Sourland Mountain region.  The Sourland Conservancy has a wonderful community of passionate, intelligent and caring members and volunteers who devote an incredible amount of time and energy to the protection of the Sourlands.

I can’t go to Baldpate without checking out the Chestnuts!  This is a Chinese Chestnut, Castanea mollissima.  I am surprised that they aren’t called “Land Urchins”!  I was hoping to find some ripe chestnuts but all of the ripe ones had been eaten and the ones that were on the ground and not eaten were also not ripe.  Maybe one day!

I think this is Wreath Goldenrod, Solidago caesia.  I have seen this goldenrod at so many different research projects and sites but I had never identified it.  I just always called it “Solidago flowers in axils” (Solidago canadensis, the more common species has terminal flowers).  One of the great pleasures I have in my current position is that I (now) have the time to identify particular species which I previously had to leave as “unknown”.

When collecting field data, we usually try to maximize the amount of species identified within a limited time-frame.  This often leads to assigning an “unknown species” a number or code, and continually identifying that “unknown” by its number, rather than by its latin name.  Now that I can go out and identify plants at my leisure, it allows me the extra time to spend and try to figure out what the plant names really are.

Common Blue Wood Aster, Symphyotrichum cordifolium.  This is another species that I have seen so many times and only identified it as “Aster spp.”.  This flower is so lovely and I love seeing it peaking out in the woods. 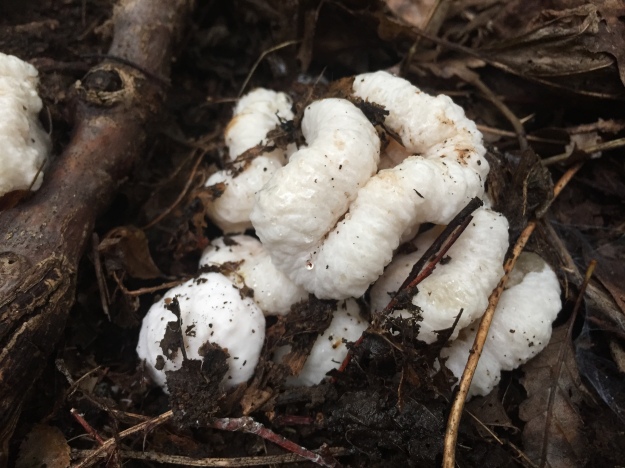 I sent this funky mushroom looking thing to Nina and she told me that this is actually two mushrooms.  The honey mushroom Amillaria is being attacked by Entoloma abortivum.  The result is an edible mushroom that resembles sweet bread.  When you see these marshmallows type things, look around for a white mushroom with grayish gills. These white mushrooms turn pinkish due to their  pink spores.  I read more about these mushrooms and I discovered that there are many Poisonous Species of Entoloma.  I know I have said it many times before but I will say it again:  Do NOT EAT any mushrooms unless you are 100% sure what it is!  As my friend said while we were out on our hike, “Everything is edible, ONCE”.

Linden Viburnum, Viburnum dilatatum, berries.  This is an invasive species of viburnum.  I’m sure this plant was brought over because of their beautiful red berries but it has since escaped and now I see it everywhere in the Sourlands. 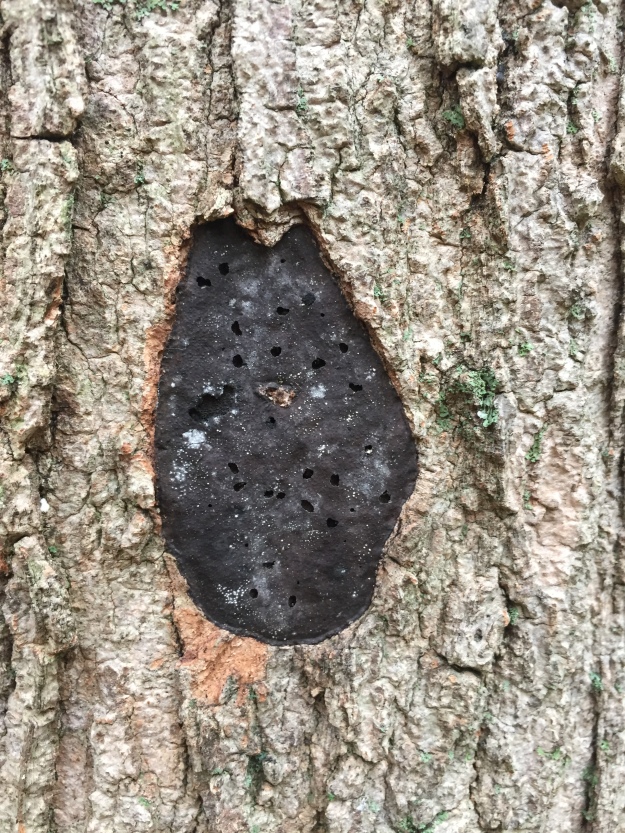 An egg mass from some sort of Gall wasp.  We didn’t know what species, but this was too cool of a picture not to post!

My friend, Dr. Natalie Howe, is a Lichenologist and she is probably one of the most enthusiastic people I have ever met.  She is just wonderful! She recently gave an engaging and fascinating talk at the Sourland Conservancy‘s Train Station Seminars on “Lichens of the Sourlands”. After her talk, I became really excited about searching for Lichens in the Sourlands.

During this hike, I found a stick covered in Lichens, so I snapped a photo and sent it off to her.  Here are her ID notes: “Flavoparmelia caperata (big green one); Candelaria concolor (tiny orange one); Parmelia sulcata (blue grey with white cracks); Physica millegrana (just underneath the orange one).”

I had thought there were perhaps two species, not four!Watch this video that describes “What in a lichen?” 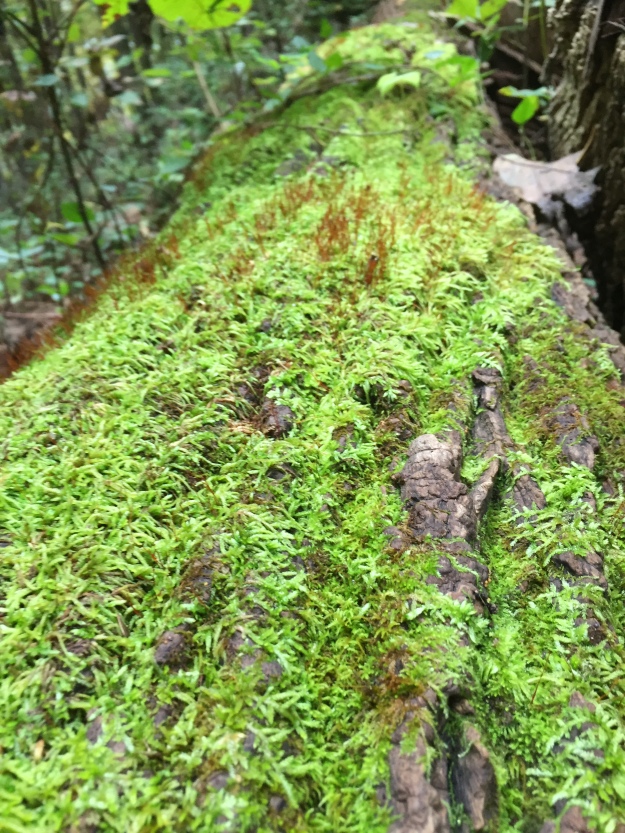 A log covered in moss.  In the background you can see what looks like a little forest of brown “sticks”.  Those sticks are called “setae” and they hold up the sporophytes.  Mosses do not produce seeds.  Instead, they produce spores which are contained within the sporophytes.

Coral fungus, Ramariopsis kunzei.  This little one was about the size of a silver dollar and just looked so cute and perfect! 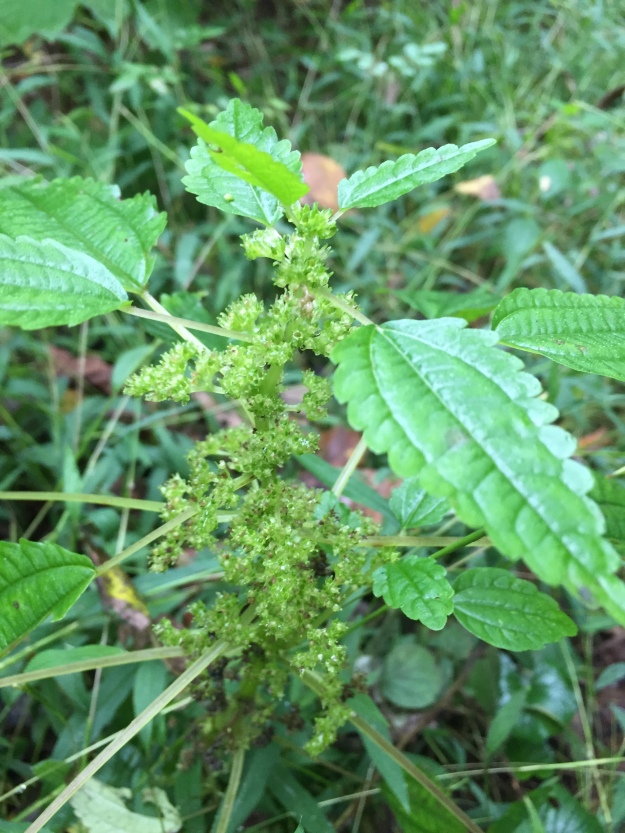 Pat Coleman helped me identify this Clearweed, Pilea pumila. While we were out hiking, we decided it was a nettle of some sort.  Then I “bravely” (or perhaps, “stupidly”) volunteered to see if it was really stinging nettles. Luckily, it was not!  I was completely stumped in this identification because it clearly looked like a nettle but did not sting like one.  Pat told me that this Clearweed is in the same family as nettles but minus the sting.

While we were walking along and chatting, I saw this out of the corner of my eye and whipped around shouting “WHAT IN THE WORLD IS THAT?!”  I nearly caused a three-person pile up with my sudden stop but it was worth the near collision.  This happens to be a Walking Stick Insect which has been attacked by the fungus, Beauveria bassiana.  I brought this picture to the Sourland Conservancy’s Train Station Seminar on “The Spotted Lantern Fly” and I asked the presenter, Paul Kurtz, if he knew what may have happened to the insect.  He told me that Beauveria bassiana is a naturally occurring soil fungus which is entomopathogenic.  Many soil insects are immune to this fungus, but most foliar (leaf living) insects are not.  This Walking Stick could have picked up the fungus if it had been on the ground and then succumbed to the fungus.  There is presently a lot of research concerning the use of this fungus as an organic pesticide.  You can read more about it here.

I finally found a Turkey Tail, Trametes vericolor!!!  When we saw this, I was very excited because, up until this point, we had only found False Turkey Tails.  I mean, this looks exactly like an actual turkey’s tail.  As my friend pointed out, Turkey Tail has scalloped edges whereas False Turkey Tail does not.  I love exploring with other people because we all see different organisms and patterns and it makes it so much more fun to learn with each other.

Hen of the woods, Grifola frondosa.  My friends spotted this big, beautiful mushroom while I was off in la-la land trying to figure out our present location.  Obviously, being in la-la land was most likely the reason why I got us lost in the first place.  I own a couple of chickens and this mushroom does remind me of their fluffy bottoms.  When I first heard of the name “Hen of the Woods”, I immediately thought “Chicken of the Woods” but I knew that I must be confused.  Again, this is a great reason to always learn the latin names of organisms.  Then, you will always know for sure what someone is talking about!

Mile-a-Mile, Polygonum perfoliatum, berries!  I had never seen the berries of this plant before and was amazed at how beautiful they are.  I spied the berries first and ran towards them. My initial squeals of excitement were quickly followed by groans when I realized to whom the berries belonged.

Leopard Slug, Limax maximus.   This critter was enormous and almost the length of my hand!

These woodland mushrooms, Lycoperdon perlatum,  are quite risqué in their attire 😉 .

Ground cherry, Physalis spp., husk.  It is possible to see so many beautiful things in nature if you only slow down for a a moment and take a look!