Link to the Hiking trail map and description.

You know you have a true friend when they don’t bail on your early Monday morning hike even though it is down pouring.  I absolutely love hiking in the rain, there are so many different smells and sounds and it feels like you are in commune with the wild things.  I get a similar feeling when night hiking – I am out of place but in the most delightful and adventurous way.  We found a lot of mushrooms on this hike, and so I reached out to the marvelous Nina Burghardt, a distinguished mycologist and former president of the New Jersey Mycological society.  I went on a Mushroom Foray that she lead for the Sourland Conservancy and was blown away by all the different types of Fungi and her wealth of knowledge.  Nina graciously identified the mushrooms we saw and gave me some helpful information on how to identify them.

An escargatoire!  A nursery of slugs.  Slugs are shell-less mollusks (phyllum Mollusca) in the class Gastropoda.  Gastropods are the largest class in the phyllum Mollusca and perhaps the most diverse.  Gastropods can be both aquatic as well as terrestrial and have some of the most intricate shells you have ever seen and some have shells that are pretty much non-existent! 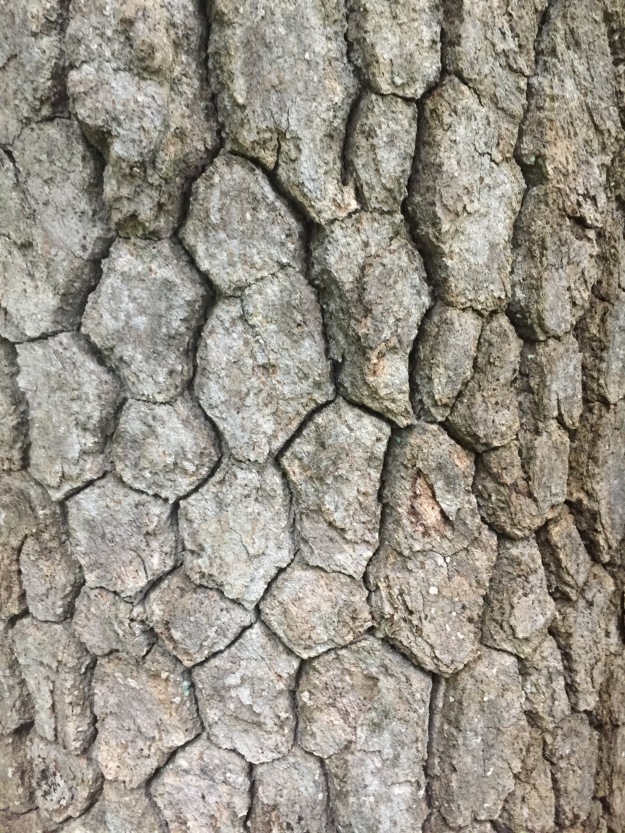 Black Gum, Nyssa sylvatica, bark.  I love how bark looks like it fits together like puzzle pieces.  Tree bark is not consistent through time, just like our skin.  When we are young are skin is smooth and as we mature, so does it  We develop our own furrows, ridges and creases that distinguish us and our stories from those who have not lived as long.

This mushroom, Megacollybia rodmanii, reminds me of the iconic photo of Marilyn Monroe standing on the subway grate with her dress flying up all around her.

I loved all the raised paths along this trail.  Don’t get me wrong, I thoroughly enjoy scrambling over rocks but these raised paths make this trail a little more accessible to those who are not quite as nimble as they might have once been.  Also, I think it just looks really pretty to see winding paths through the woods.  Some of these raised paths were pretty far in and I can imagine how much time and effort it took those who built it to bring in all the wood and supplies.  Imagine being a few miles in and then realized you left your hammer back in the car?!

These fantastical orange mushrooms are, Pholiota limonella!  Autocorrect changed the species name to limoncello, which obviously made me want a cocktail.  The picture really doesn’t do the mushroom justice, it was spectacularly orange, in great contrast to the dark wet colors of the rain soaked forest.  These mushrooms are saprophytic and work as decayers of organic matter.

Little Toad!  This is either an American Toad, Anaxyrus americanus or a Fowler’s Toad, Anaxyrus fowleri.  I was informed by the trusty Sourland Stewards that these two species hybridize in our region.

Japanese Barberry, Berberis thunbergii, creates a perfect habitat for black legged/deer ticks, Ixodes scapularis.   Deer ticks are the vector for the bacterium, Borrelia burgdorferi, that causes Lymes disease. Japanese Barberry creates the perfect habitat for deer ticks to thrive, get their first meal and reproduce.  This article from entomology today goes into more detail about the effects of this invasive plant on the increase of the deer tick population and increase of Lymes disease. 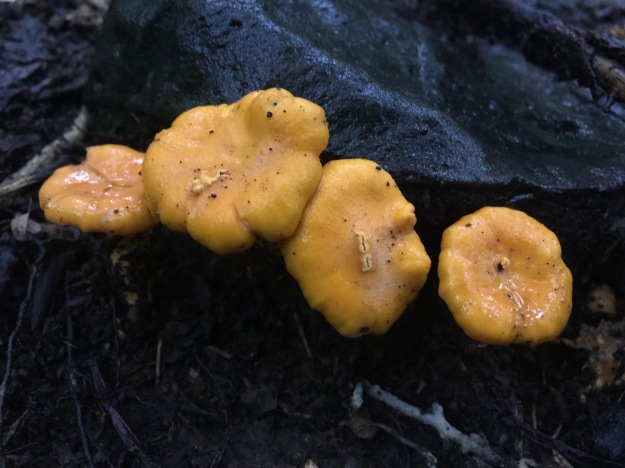 Chanterelles, Cantharellus spp.  Prior to going on a hike with Nina, I had never seen a chanterelle in the wild before.  Now I see them EVERYWHERE!

Someone lost an earring.  I love the thoughtfulness of the finder to hang the earring up on the trail blaze, and I hope that the owner reunites with their lost item. 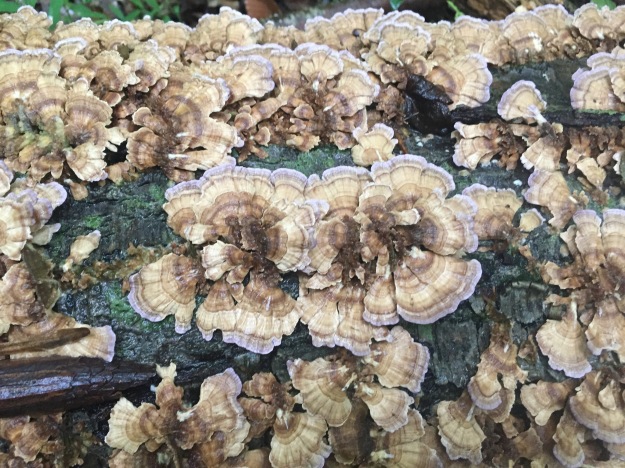 Purpletoothed Polypore, Trichaptum biforme.  The young mushrooms can be a brilliant violet color that fades as the fungi matures.  Polypores are also hardworking saprophytes that decay hardwoods.

We stood here scratching our heads over this tree.  How did this happen?  What is holding it down?  The tree is still alive and there is nothing pining it down in this arch. 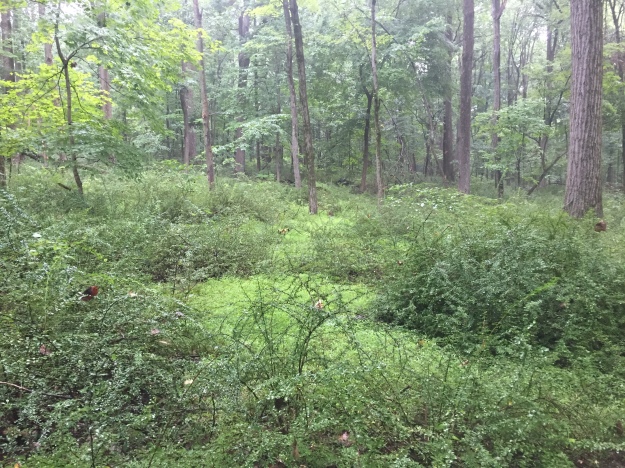 Old Man of the Woods, Strobilomyces floccopus.  I wonder why this mushroom was given this common name…  This is a young Old Man of the Woods (hehe), but as they mature the cap  starts to look like a perfectly scored loaf of fresh bread.

A fly, Drosera spp. hanging out on the underside of a mushroom.

Mimosa?  I’d love one, thank you!  Oh… the tree… right….  Mimosa (also called Persian Silk tree), Albizia julibrissin, is an invasive ornamental belonging to the bean family, Fabaceae.  I learned about this plant during my undergraduate study and now I am obsessed with it.  Mimosa has a really interesting response to stimulus, whether it be touch or sudden change in temperature.  Turgor pressure is what gives plant cells structural stability, and this crafty plant is able to change that turgor pressure in the leaves, causing them to fold.  This response is hypothesized as a way to protect the plant from herbivory and desiccation.  Before you do anything else today, please watch this video!  I promise it will be a very interesting 16 seconds of your life… and you should also watch the stronger response video too!  I bet you won’t be able to contain yourself from tickling the next Mimosa you see!