A picturesque Friday morning in July.  When I am inside, light and temperature are fairly constant and very predictable.  It can also be changed by a flick of a light switch, a closing of blind, an increase or decrease of a thermostat.  When you are outside and the temperature and light are perfect it is so much more satisfying than when you are inside.  When you are outside and this perfection encloses you, it feels like the whole universe is welcoming you and beckoning you to explore.  I will admit that I was hurried and frazzled upon arriving at our meeting spot but once I stopped and took a breathe and saw what a beautiful morning it was, I calmed down and relaxed.  This was going to be a fun morning of wandering around looking for plants and enjoying engaging conversation about ecology.

I was running late this morning and so I didn’t have a chance to eat breakfast before meeting up with my friends.  As we hiked into the woods I was more than delighted to pick wineberries, Rubus phoenicolasius, and blackberries, Rubus allegheniensis, and add them to my yogurt.  Truth be told yogurt is not exactly the nicest to eat while walking, but when you’re running late, you gotta do what you gotta do! 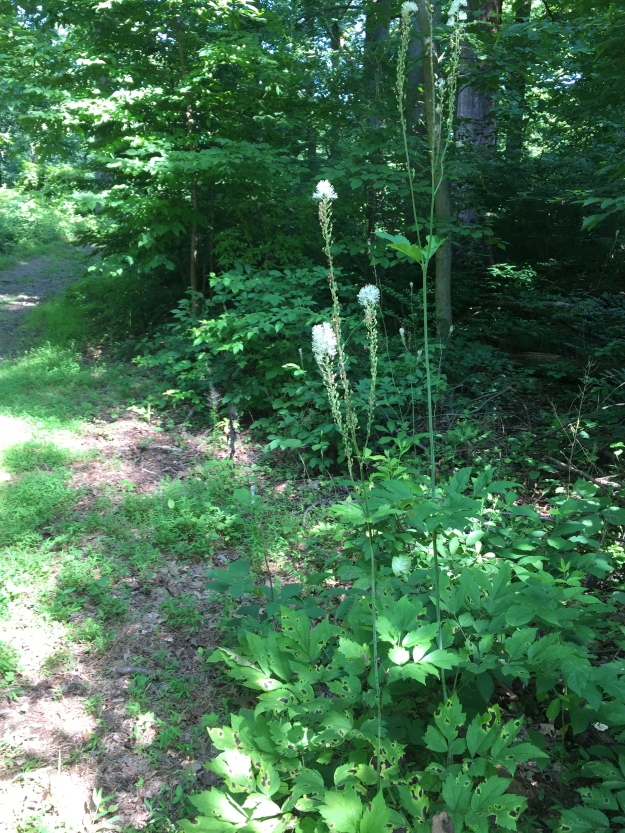 Please gaze upon the beauty of Black Cohosh, Actaea racemosa, flowers.  For real, can you believe that these are natives that are just so spectacular that they put out these enormous inflorescences in the middle of the woods??? 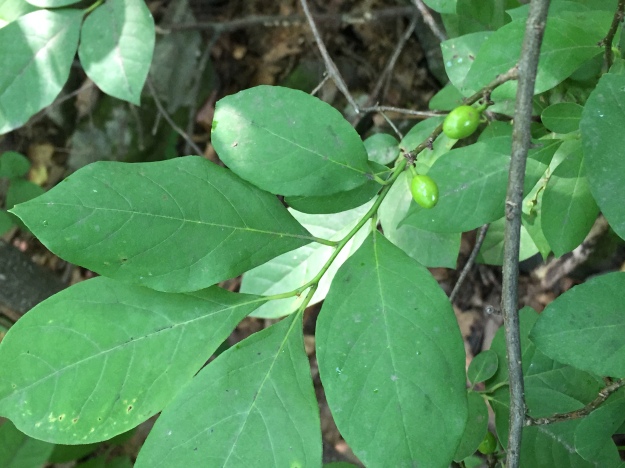 Spicebush, Lindera benzoin, berries!  When they ripen they will turn a bright red and apparently can be used instead of allspice!  Here is a post by a forager about how to harvest and use Spicebush. 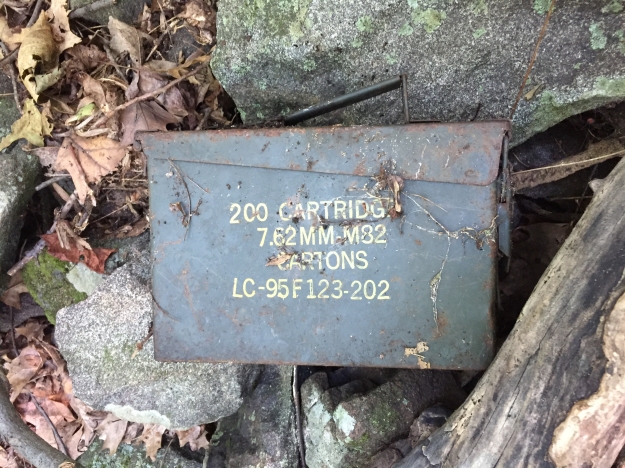 An ammunition carton…  I really don’t know much about guns, but it looked fairly old.  We at first thought it might be a geocache box…  It wasn’t.    I don’t really know what else to say about this other than it was an unexpected find!  If I learn anything more about it, I’ll come back and update the post 😉 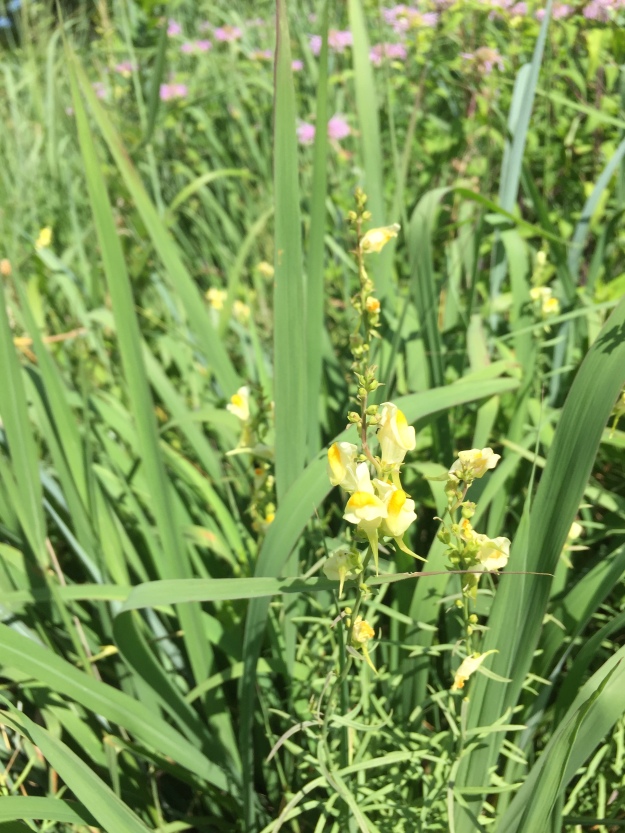 Yellow Toadflax (or my preferred name: Butter-and-eggs!), Linaria vulgaris, an invasive but oh-so-pretty field weed.  One Butter-and eggs plant can produce up to 30,000 seeds per year…  needless to say, these plants are hard to get rid of once they become established! 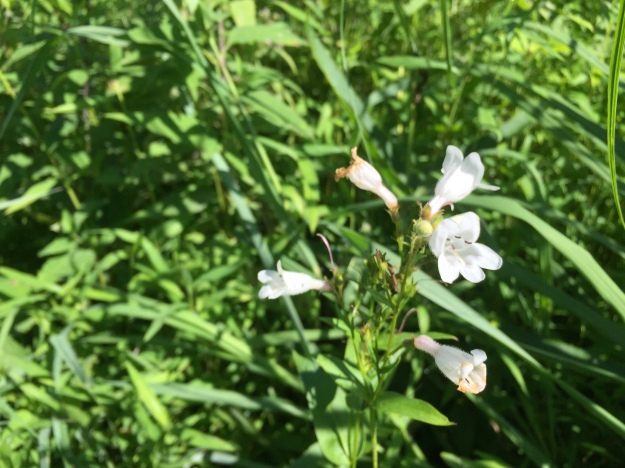 Foxglove Beardtongue, Penstemon digitalis, a native flower loved by many different types of pollinators.  Foxglove beadtongue also a unique characteristic called a “nectar guide”, which are lines that run along the inside of the tubular flower, guiding pollinators to the back of the flower where the nectar is held.  Read more about it here!

At the top of Baldpate mountain.  On my birthday for the past few years I have woken up early, picked up a bagel and had myself a picnic then headed into the woods for a solo hike.  I love bagels… I love Badlpate… Its a great way to start another year of living!  Even if you aren’t up for a big hike, just parking and hiking up this hill and having a picnic is a great way to get some fresh air and enjoy the view!

A bumble bee, Bombus spp., on a Wild Bergamot (also known as Bee Balm), Monarda fistulosa.  Wild Bergamot is in the mint family (Lamiaceae) and has mint scented leaves that can be used to make tea.  This gorgeous flower is native to the United States, can tolerate a range of soil conditions and is attractive to bees and hummingbirds alike!

A beautiful pollinator habitat.  Supporting pollinators with native plants can create an absolutely stunning landscape.  Who wouldn’t want to look out their backyard and see this?

A Scarlet Tanager, Piranga olivacea!!!  I am not a birder by any means, but I was SO excited to see this bird!  I first saw the red on a tree out of the corner of my eye and thought it was a trail blaze and then quickly realized it was a bird.  The scarlet tanager is greatly impacted by habitat fragmentation because they are considered “interior” birds.  The Sourland Mountain region hosts the largest contiguous forest in central NJ and provides critical habitat for these birds and many other plant and animal species.  Here is a handout for land owners on how to improve habitat for the scarlet tanager!

European chestnut, Castanea sativa, and Chinese chestnut, Castanea mollissima, leaves.  American chestnuts, Castanea dentata, was once a dominant tree species in the United States and has since been mostly wiped out from the Chestnut blight, Cryphonectria parasitica, which is a fungal disease that attacks the vascular cambium layer of the tree and cutting off the flow of nutrients within the plant.  There is large push to try to breed resistance into American Chestnuts to make them resistant to this blight (the European chestnut is susceptible to the chestnut blight, however the Chinese chestnut is not).   On October 12, my dear friend and I will be giving a talk titled “American Roots” on the history of the American Chestnut and the efforts that are being made to bring this iconic species back to American forests.  There will be history, science and music – a night of lots of fun!  Make sure to check out the Sourland Conservancy’s website and the Facebook page for updates about registration.

A sea urchin in the Sourlands!!!!  Just kidding 🙂  This is a Chinese Chestnut, Castanea mollissima, bur.   The burs open to reveal the nuts when they are ripe.  Be careful, they are super sharp!