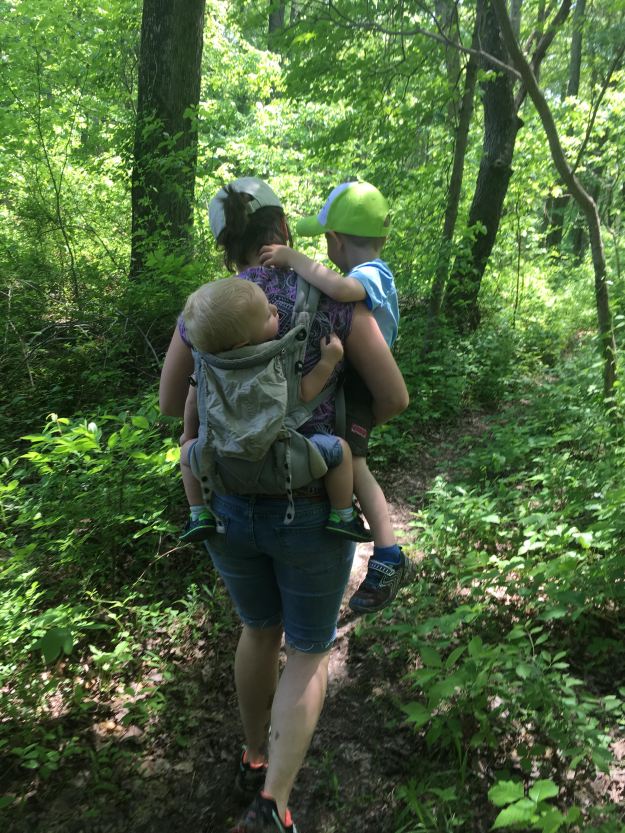 Last time I was here, I was alone and everything was snow covered.  This time, the wild boys and my sister came out for the hike.

Sassafras, Sassafras albidum, displaying its three leaf forms (simple, mitten, trident).  I am not sure if I love Sassafras more because of its name or that it smells like fruity pebbles, but I always giggle to myself whenever I see it.  Most often it grows as an understory shrub, but it can reach 20ft in height.

Black Cohosh, Actaea racemosa, a NJ native with fabulous spike flowers.  I have heard that some herbalist recommend making a tea from Black Cohosh to induce labor.  While this plant is beautiful and would make a wonderful garden plant, I would seriously discuss taking any type of herbs/medicine with your doctor especially if you are pregnant!

Green Ash, Fraxinus pennsylvanica.  The picture on the left is a very young plant and does not yet have compound leaves.  The photo on the right is also young, but it is displaying the compound leaves typical of green ash.  Currently the Green Ash is being threatened by the Emerald Ash Borer (EAB).  The EAB has been devastating the green ash all along the East Coast, but has only has entered New Jersey in recent years.

High Bush Blueberry, Vaccinium corybosom.  I will definitely be coming through this area again in July/August!  There are few things better than vine-ripened fruit! 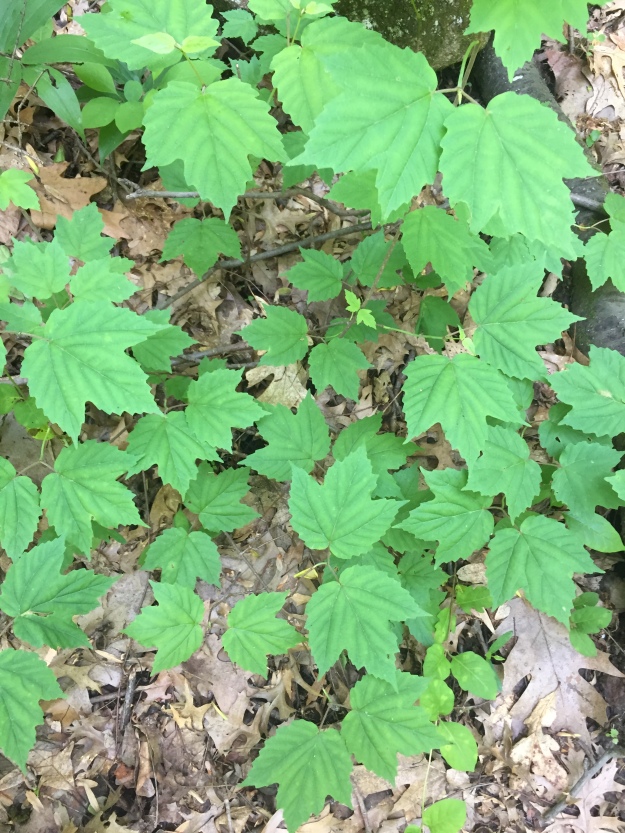 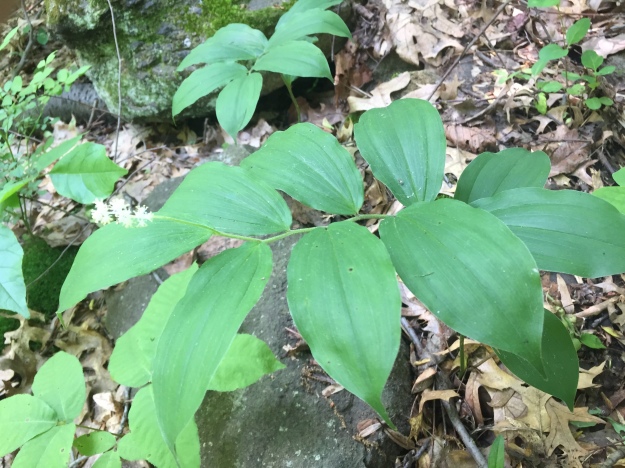 Epicormic leaves on American Beech, Fagus americana.  Trees will produce these epicormic leaves or shoots when it needs to increase photosynthesis due to damage to the tree or some other stressor.  As you can see in this picture, the leaves are coming out of an area that had previously been damaged.  This does not always occur at every point of damage in a tree, but it is more likely to occur here or near the root flare. 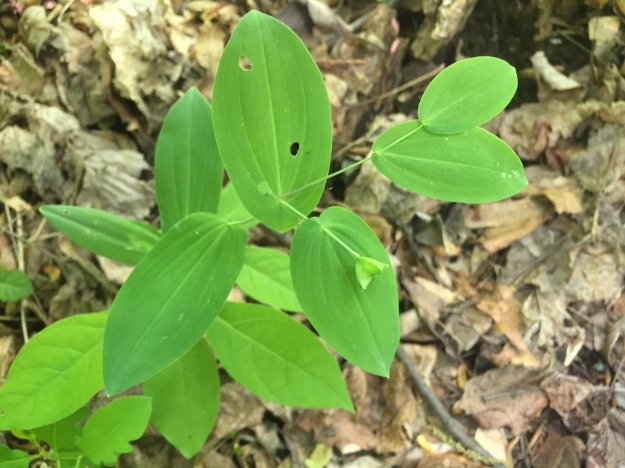 Perfoliate Bellwort, Uvularia perfoliata!  I just love this little plant!  I think it is so cool how the stems perforate through the leaf.

Wine Berry, Rubus phoenicolasius, an invasive berry species.  Similar to Black Raspberry and Blackberry, but the berries tend to be a little more tart.  It is one of those lovable invasive species that many hate to remove. 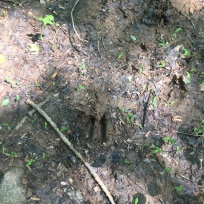 Tracker-in-Training!  My Dude pointing out all the animal tracks along the way!  ) 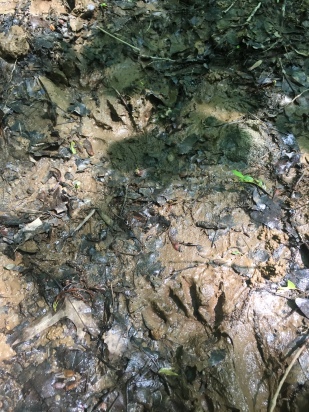 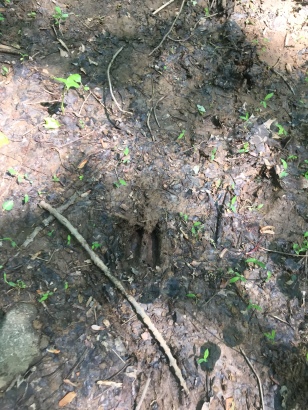 (Raccoon on the left, Deer on the right

Tick Trefoil, Desmodium spp., there are several species that are native to New Jersey, but I am not sure what species this is. 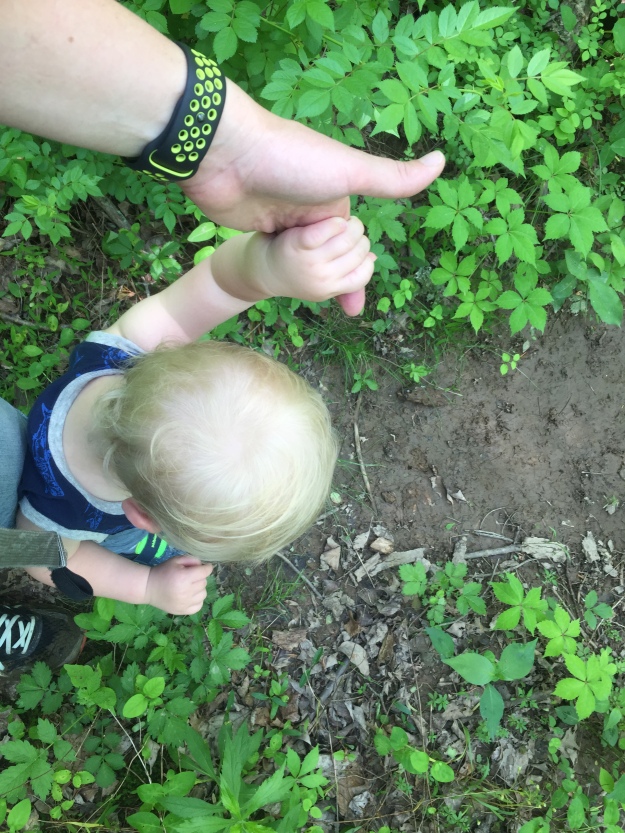 Littlest Dude did not want to be carried, he wanted to walk and protested until I put him down to walk.

Autumn olive, Elaeagnus umbellata, a common invasive found in these parts.  The red berries are often eaten by birds, but they are also edible for humans!  One of my former co-workers used to make a fabulous Autumn Olive cheesecake, with a compote of Autumn olive on top.

I am not sure if this is Slippery Elm, Ulmus rubra, or American Elm, Ulmus americana.   Both of these species are found in this region and are very similar in characteristics.  My initial gut reaction was Slippery Elm, but I cannot say for certain. 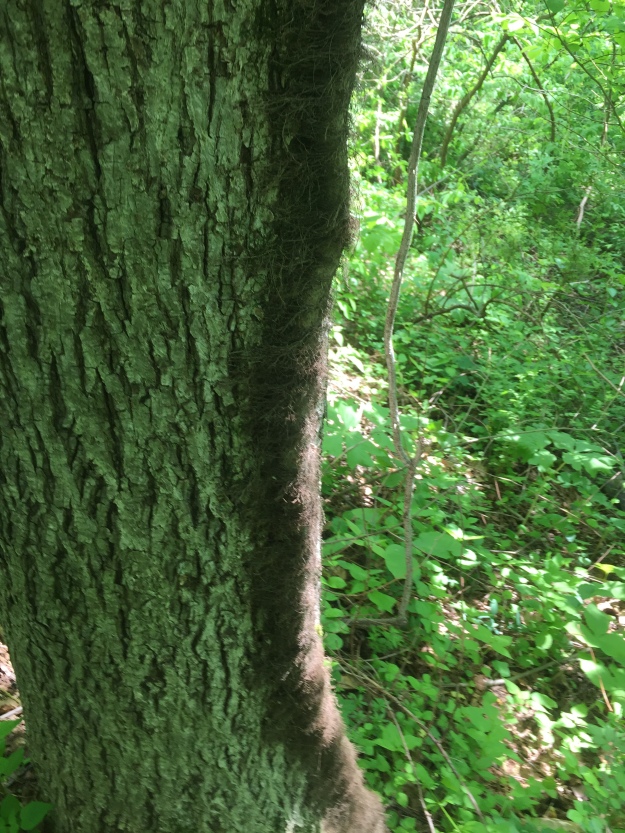 If its hairy, its scary!  A large poison ivy (Toxicodendron radicans) vine growing up a tree.  Don’t lean against this one! 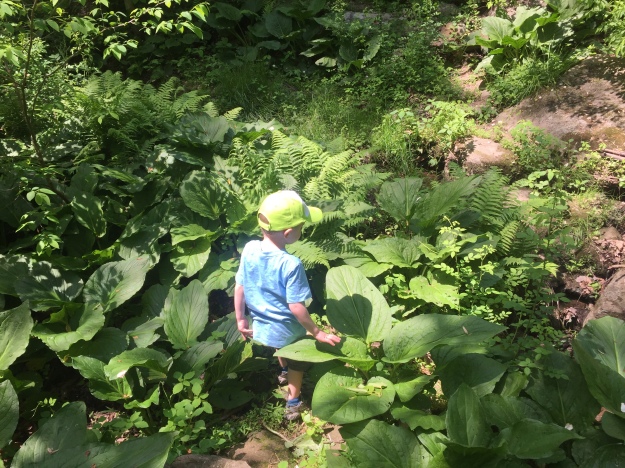 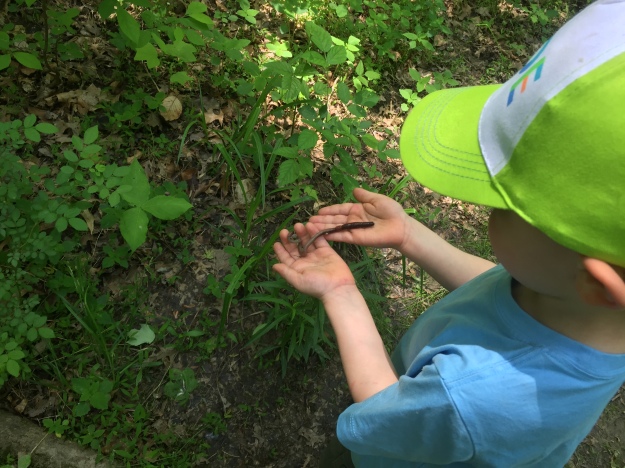 3 thoughts on “Omick Woods in Spring – A totally different experience!”